Debug Your Applications from Development to Production 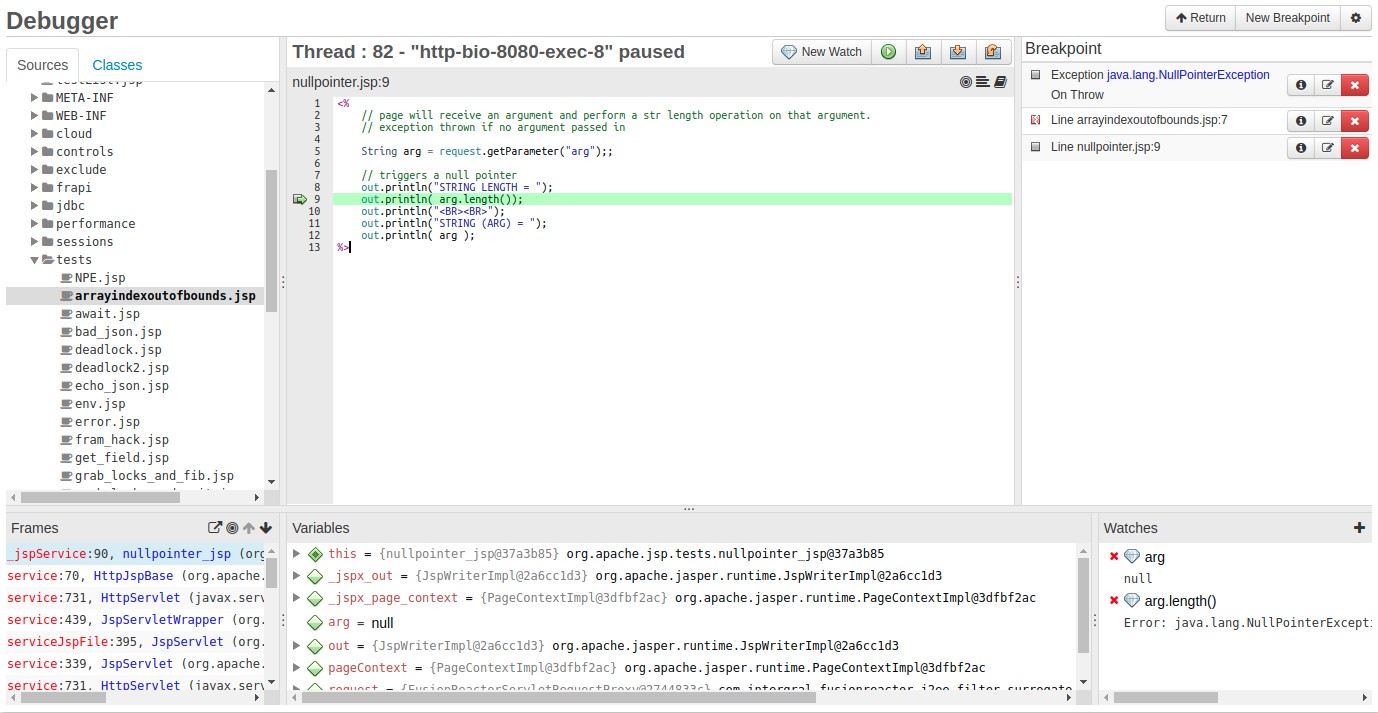 FusionReactor’s debugger contains a fully featured, low overhead, ‘IDE’ Style debugging browser console (see below) as well as the ability to capture stack trace and variable context state at any point where you may set a breakpoint in your code. No need to write variables out to logs – just run FusionReactor and set a breakpoint and you can receive an email with all the information you need. Easily perform remote Java debugging for any JVM.
The debugger supports Java and ColdFusion.

All built into FusionReactor! The Debugger gives you all the control you need to simply and securely interact with your production environment as issues unfold. The insight it provides will revolutionize how you identify problems. Unlike a typical debugger, you can setup conditional breakpoints and be alerted by email when they fire. The email will contain a link to the debug session, as well as stack trace and variable details at the instant the break point fired. It has NEVER been easier and faster to get to the root of issues.

Setting Breakpoints (BP) is really easy and FusionReactor supports various methods to control breakpoints, such as On Exception, Field Modification, Java Method Entry and Source File-Line Number. You can also setup conditions which need to be met before the BP fires. The Fire Count controls how many times the BP will fire.
Other elements control how the engine will attend to the breakpoint e.g. open a debug window, email a stacktrace or capture metrics.

One of the options on the Production Debugger is to pause a single thread for a specific period of time when a breakpoint fires. The Debugger can control how many threads it will halt, so this ensures it doesn’t halt your whole application. In this example you can see that the thread will Timeout in 19 seconds. Unless we attend the breakpoint within that time, then the thread will simply continue to process.

FusionReactor can be configured to send you an email containing the complete stack trace PLUS all the scope variables which were set at the moment the breakpoint trigger fires – at that exact point in the code.
This capability means that you no longer have to include debug code in your applications to write variables into log files or force dumps to capture context.

Having the stack trace plus variables can often be enough to pinpoint what the actual issue is – so you may not even need to debug via the integrated debugger.

Remote Java debugging is not a new concept and you can find numerous articles explaining how to setup various IDE’s such as Eclipse, Netbeans or IntelliJ to perform remote debugging of a Java Application. There are many reasons you may want to be able to do this e.g. local debugging is not possible, you are running docker containers and it’s difficult to attach a regular debugger, the code you wish to debug is not running on your local machine or the problem you’re trying to isolate only occurs on another environment (usually production) etc.

Before we go any further though, let’s take a step back and look at the main reasons you may NOT want to debug a remote (production) application. (Make sure to read on, to understand how FusionReactor addresses and solves these concerns though!)