What causes a ClassNotFoundException in Java and how to avoid it 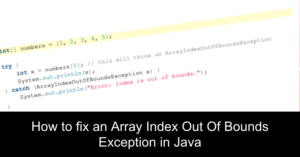 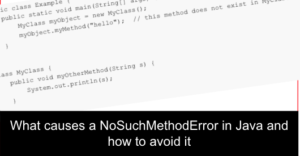 What causes a NoSuchMethodError in Java and how to avoid it

What causes a ClassNotFoundException in Java

In our article “5 Common errors you may see in Java Stack Traces and how to avoid them“, we took a quick look at the ClassNotFoundException; in this article, we discuss what causes this exception and how you can avoid it.

A classpath is a list of directories or JAR files that the JVM uses to search for classes. When a Java program tries to load a class, the JVM looks for it in the classpath, and if the class is not found, a ClassNotFoundException is thrown.

How to set the classpath

There are several common reasons why a ClassNotFoundException might be thrown:

This exception can also be thrown if the class is present in classpath but the class is not available at runtime due to some dependencies missing or if there is a version mismatch between the class being loaded and the class at runtime.

It is important to be aware of the cause of the ClassNotFoundException and to address it as soon as possible so that the class can be loaded and the program can continue to execute.

An example of how a ClassNotFoundException might occur in a Java program:

In this example, the program is trying to load the JDBC driver for MySQL using the Class.forName() method. The driver class is com.mysql.jdbc.Driver. If this class is not in the classpath, a ClassNotFoundException will be thrown. This is the most common reason for this exception.

The classpath can be set in a number of ways. It can be set as a system variable, for example, CLASSPATH in Windows, or it can be set as an environment variable. It can also be set in the command line when running the Java program by using the -cp or -classpath option.

For example, to run the above program, you can use the following command:

In this case, the MySQL connector jar file is added to the classpath, and the program can find the com.mysql.jdbc.Driver class and create a connection to the database.

It is important to ensure that the necessary classes are available in the classpath so the program can find and use them.

How do you find ClassNotFoundException in Java?

A ClassNotFoundException in Java occurs when the Java Virtual Machine (JVM) cannot locate a specific class referenced in the code. To find the cause of a ClassNotFoundException, you can check the exception stack trace to see which class is missing and where it is referenced. Additionally, you can check that the class is in the classpath and check the spelling of the class name in the code. If you are using an IDE, it can also be helpful to check that the class is imported correctly and that any necessary dependencies are included.

An Application Performance Management (APM) tool such as FusionReactor can detect and diagnose ClassNotFoundExceptions in Java applications. APM tools typically provide real-time visibility into the performance of an application, including the ability to track and report on exceptions. FusionReactor can also provide detailed information about the cause of an exception, such as the line of code where it occurred and the state of the application at the time of the exception.

To find ClassNotFoundExceptions using an APM tool, you can set up monitoring and alerts for this type of exception and then analyze the data collected by the tool to identify the root cause of the exception. The APM may also provide a stack trace of the exception, which can help you to identify the missing class and the location in the code where it is referenced. Additionally, most of the APM tools provide a way to filter out or group the exception by application, host, error message, etc.

It’s important to note that you need to have an APM tool in place and configured correctly before the error occurs; otherwise, it won’t be able to capture the exception.

What causes a ClassNotFoundException in Java and how to avoid it

In this article, we have explained how you set the Classpath in Java and examined why the ClassNotFoundException might occur.  In other articles, we look at other common Java Exceptions, including; How to fix an Array Index Out Of Bounds Exception in Java, What causes a NoSuchMethodError in Java and how to avoid it, and What Causes java.lang.OutOfMemoryError.