There’s an increasing demand for flexible observability and monitoring solutions that can collect all the data about their environment in one place by organizations, businesses, and developers.

First off, you can only monitor an observable system. And with observability lies a powerful tool capable of evaluating the status of internal systems simply through its outputs. Your team can save time by using an observability tool instead of detective work that will distract you from product development. Observability is the ability to understand a system’s state from its outputs. This puts you at an advantage as it arms you with the knowledge to ask any question to know how codes are behaving. Observability provides insight into a system’s overall state and is usually related to its infrastructure.

Ops teams, Engineering and SRE use observability to actively debug their systems. As a consequence, observability explores areas that were not defined or uncovered. Why this is pertinent is because code can behave differently from the production stage and staging stage. Users may be impacted by these changes, so it is important to observe what’s happening in production when it affects them.

Monitoring is a practice that empowers SRE and Ops teams to look through and understand the different states of their system. This can be done through already established metrics, dashboard reports that are constantly updated in real-time.

What do observability and monitoring have in common?

Observability and Monitoring are symbiotic, and yes, they serve different purposes. Observability means that data is accessible, whereas monitoring means collecting and displaying that data, then relying on it for further analysis or monitoring.

The three pillars of observability

Observability has been divided into three core pillars, namely; metrics, Logs, and traces

These numbers describe a particular process or activity measured over intervals of time. A metric is a collection of all data about the performance of a service. Most times, it is made up of a single number which is tracked over time. Before now, traditional system metrics such as CPU< MEMORY and disk performance were relied upon for tracking. This includes data collection such as; The number of queries by a particular time frame, The latency involved with service requests or queries, and CPU profiling.

The major setback with metrics is that, while this gives enough information on the system, it doesn’t provide user experience and ways to enhance your code performance. Modern monitoring services now offer APM services as a solution to this issue. APM is integrated with features capable of tracking application-level metrics. These metrics have requests per metric, error rates.

Every metric here tracks a single variable and can be quite cheap for storage and likewise sending. DevOps teams, Ops, and SRE teams usually play a big role in determining the best set of metrics to watch out for. This is subject to variations depending on the service itself and its overall maturity. Often, teams watch their metrics dashboard for code changes anytime a new fix or release is shipped. Common metric sources include; System Metrics (CPU, memory, disk), Infrastructure metrics, web tracking scripts (google analytics, digital experience management), application agents (APM, error tracking), Business metrics (revenue, customer sign-ups, bounce rate, cart abandonment).

Logs are often referred to as time-stamped records and immutable events. They are the permanent records of events that have occurred. They can be relied upon to identify specific patterns in a system. They generally represent the output from your code. Every process within a system emits logs; these logs contain records of individual user queries plus debugging information, which is always associated with the service. Programming languages and frameworks rely on libraries to generate logs from the running codes with a couple of distinct levels of specificity. Must have information in logs include; Timestamp, Mac address, Session Id, Source ID, Source IP, Status Code, Response time, HTTP headers. The process of analyzing the contents of logs through queries is called log monitoring.

When an event is time-stamped, a trace displays the operation flow from the parent event to the Child. Individual events forming a trace are called spans. Each unit of span stores the following information; Start time, duration, and parent-id. If there is no parent-id, such spans are rendered as root spans.

With traces, it is possible for individual execution flows to be traced through the system. This goes a long way to help teams figure out what component or set of code is responsible for a potential system error. Teams can adopt dedicated tracing tools to look into specific requests. Analyzing trace spans, including waterfall views responsible for showing multiple spans in your system, can help you run queries to examine latency errors. FusionReactor provides tracing capabilities as one of its core offerings.

There’s an increasing demand for a flexible observability solution that can collect all the data about their environment in one place by organizations, businesses, etc. With an APM solution, you’re open to gaining insights into real-time customer behavior, and application errors, or a drop in conversion rates. With a reliable observability tool, you’re bound to get a better understanding no matter what complex infrastructure you are dealing with. Some benefits accrue to you for relying on a good observability tool. This goes on to include;

Also, If you are having issues migrating to a microservices-based environment, you might not be alone. Others have had similar problems. Before now, they relied on multiple monitoring tools to get visibility into their complex application system.

Advantages of using an APM;

The ultimate goal of observability and monitoring

The ultimate goal of observability and monitoring is to improve the system. Research teams that offer a variety of monitoring and observability solutions include; DevOps Research and Assessment (DORA) Research. Observability can help you integrate with your tools properly. It can equally help you run the analysis for faster and timely incident resolution and ongoing team learning. Lastly, for overall convenience, you can share the derived information with relevant stakeholders. 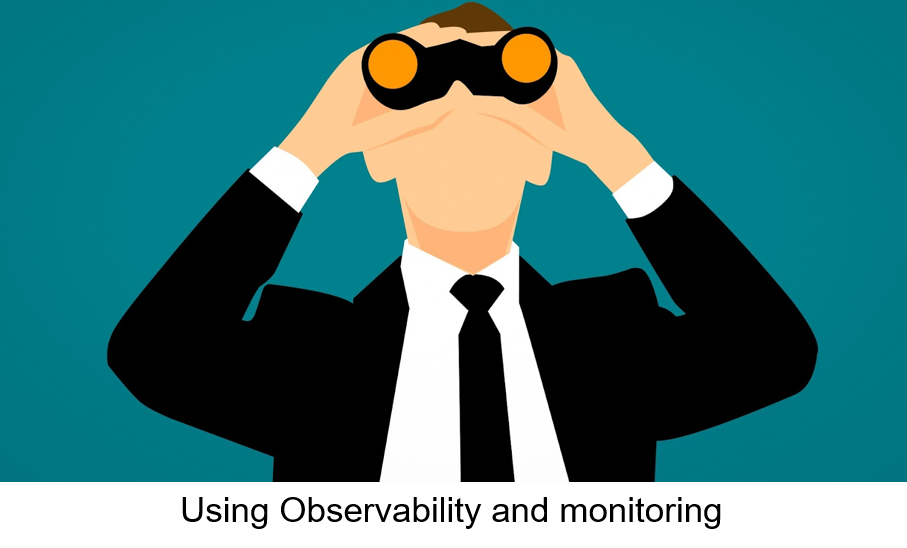 Benefits of observability and monitoring